In the darkness of the early morning, it seems that there is a me who has just come from a dream, looking at the other me, that is always still. Isn’t it because of the darkness that they can meet?

“I am, we each are, the inmost of an endless series of Russian dolls; you who read are now encased within a layer I built for you, or perhaps my stories are now inside you. “We live as literally as that inside each other’s thoughts and work, in this world that is being made all the time, by all of us, out of beliefs and acts, information and materials. Even in the wilderness your ideas of what is beautiful, what matters, and what constitutes pleasure shape your journey there as much as do your shoes and map also made by others.”

Time as we usually know it has no meaning when these artists examine the infinite possibilities of a living self-consciousness. They recognise the inseparable relationship between impermanence and constancy. 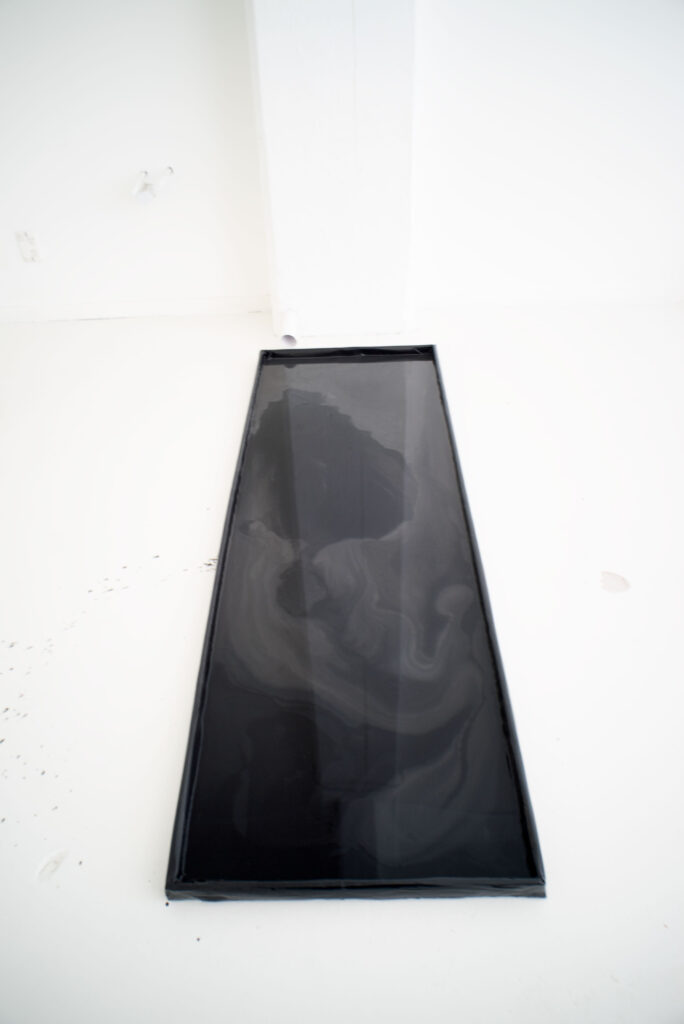 Exploring the self in relation to construction of myth and narrative this disappearance reminds people of the living artist  and increases our awareness of our own immersiveness.

I forget I forgot

Tuitui Art Space is a room filled with stillness and movement. On a warm spring afternoon in October it is awash with light. I am seeking a way to translate the energy of this space where a group of artists make movement from stillness.

The title of the show suggests a starting point. Backyard Cabbage Tree, City night sky grey, Clouds clear, Cold full moon, shines through. It is descriptive, yet evocative, like a poem. Over coffee and cake the curator, Ryan Sun explains how the exhibition and its title came into being.

Ryan has been working on this exhibition for a year. He met once a week with Kirsten Dryburgh to discuss the ideas that would underpin this show. As Ryan describes his thinking process and his dialogue with Kirsten, I am reminded of a statement that the writer and curator Jens Hoffman makes in his book Theater of Exhibitions, “An exhibition, like theater, is a unique format for thinking through ideas, history, and culture, and a way to engender new forms of awareness of the world around us.” (Hoffman 30).

RS: “Kirsten and I discussed consciousness and how to understand it – what is happening in the world and how it relates to ourselves in this period of time. At our meetings we compared East Asian philosophy and European philosophy. During the Song Dynasty the Chinese philosopher Wang Yangming described how we understand the world. We begin with understanding our own body. Then there is the connection with the world itself. Finally there is the understanding of the relationship between myself and the world. We are one. Always connected.”

Ryan said that his discussions with Kirsten became very deep and complicated, “like diving into a deep ocean”. In response to this they produced a title that was pared back and just touched the surface of this territory. A title that might convey the feeling of “night surrounding a person, surrounding a consciousness”. However they continued to dive back into the ocean of history and culture.

RS: “We looked at the commonalities between the writings of Wang Yangming and Hegel. We can understand the world through an interior life, not an exterior life. Via Hegel we understand three different states. Firstly, the physical body: our basic desires and needs, then the future that is more than physical eg. dreams and love, and finally our relationship to the world and others: a communication beyond language. This is an energy cycle. We relate this cycle to art. What is art? What does art mean for artists? Why do we want to produce art? How is the art born?”

Ryan’s artworks often emerge from found objects and moments. Perhaps, after meditation, he is walking on the beach and he finds something that makes him feel different. For him, the art is born in that moment. Later on it might become a sculpture but that moment of encounter is of great significance.

RS: “It is like a mirror. In that moment I clearly see myself. I see energy. I feel alive.”

The title of the show emerges from this form of art practice. As a curator Ryan is drawing together artworks that are beyond logic.

RS: “If I want to tell you about something, eg. cake, I let you taste it yourself. I have my own experience. You have your own experience. After 1980, advertisements emphasised a certain lifestyle. The purpose was an increase in quantity. But creative industries suffer because of that logic. When galleries and artists are dependent on such logic then art is not invested in telling the truth. Talent is compromised and when the economic system is depressed art is lost.”

Two visitors enter the gallery while Ryan and I are talking and they wander amongst the artworks as if they are visitors to a garden with rare and unusual plants. Phil Dadson’s flecks of colour spiralling kaleidoscopically on paper. Pascal Harris’s piano linked to tiny photographs that dance when the keys are played.  Zon Sakai’s street performance Heavy Duty is being projected onto the wall. Zon carries his inflated rubber artworks on his body, or his bicycle or cart. I am not sure what the visitors are feeling. They look bemused. To me, this artwork is best seen from the far corner of the gallery where you can see the full projection of Zon’s work on the wall but you can also see a small part of it reflected in Kirsten Dryburgh’s Milk Moon. The black tray of Milk Moon, filled with india ink, acts as a mirror. On the day of the opening a moon of frozen milk melted slowly into the ink. Before that day I had imagined that the milk would sit in definite streaks on the dark ink, like a bright comet’s tail. Instead they merged together into a smoky mist. The milk became a faint, grey streak like a wisp of cloud in a clear, night sky. I feel moved by this work. By its beauty and strangeness. The ordinary objects are transformed in their relationship with each other.

It takes time to look at art. To really see it. When I am drawn to an exhibition I return two or three times to it. Each time I experience it in a new way. “Backyard Cabbage Tree, City night sky grey, Clouds clear, Cold full moon, shines through” is small but vast. I cannot describe every artwork. I can only give you a sense of my experience. The artists and the artworks within the exhibition are separate and connected at the same time. They change in relation to each other. TuiTui Art Space holds the warm energy of freedom and contradiction, the separateness and connectedness of the world.