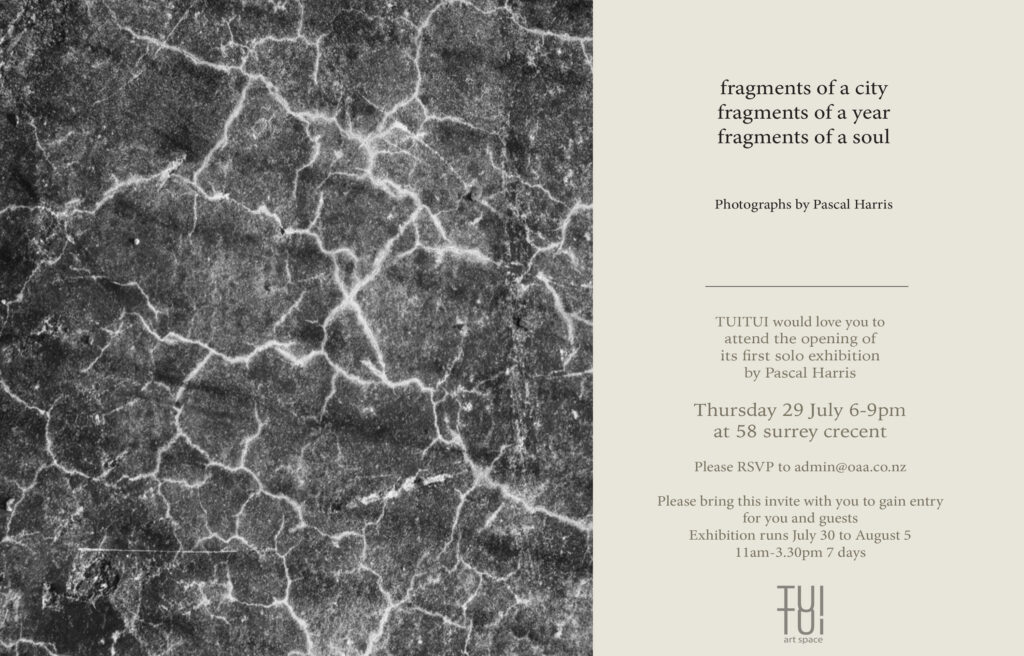 fragments of a city

fragments of a year

fragments of a soul
This exhibition was planned to take place in February this year, but at that time I got a sudden invitation to perform 40 solo piano recitals, which I accepted, as I could do with both the money and the experience. This exhibition was originally going to center on the summer. I thought up a title for it: ‘Eternal Summer, Eternal Desire’ and the following statement:
‘In my Auckland, every summer is the same summer.
The days are repetitions of each other.
Day after day, I walk the streets trying to capture something that slips through my fingers.
Chasing the desire of my eyes.
Reaching into the deep well of eternity.’
I remember these days, the heat and the bright light, the shining objects before me, always elusive… When my concerts finally finished I could at last return to my exhibition project. But in the interim it had changed shape. I no longer wanted to confine it to those summer months, but to include images I had captured in between my concerts as well as some before the summer had started. The heat of the summer had completely faded and been replaced with winter. A winter which seemed to have a sepia hue in contrast to the bright summer. When I lived in Japan I used to look forward to the cherry blossom season at the beginning of spring, when the ordinary surroundings would be transformed into a paradise. But along with pleasure, there was also a sense of pain knowing it would only last a short two weeks or so.
With the Auckland summer I felt not pain, but a kind of desperate urge to enjoy those days of hot desire while they lasted. Unlike Japan, here there is no such clear-cut and poetic delineation of the seasons with all their rituals and symbolism. Instead there is a sameness, a banality, something that I can never connect with… and so I keep searching for fragments which, when I piece them together, create a sort of identity I can recognize, which I can call ‘myself.’ -Pascal Harris 13/ 07/21

Conceptual, B&W photography / Group exhibition / Presented by Original Art Association "We shutter our eyes...maybe the daylight is too harsh... When we see the colors becoming black and white, the unspecified five colors close to the chest are dancing... Are they, in some sense, the living contact with a self, formed of consensus non-real reality?"